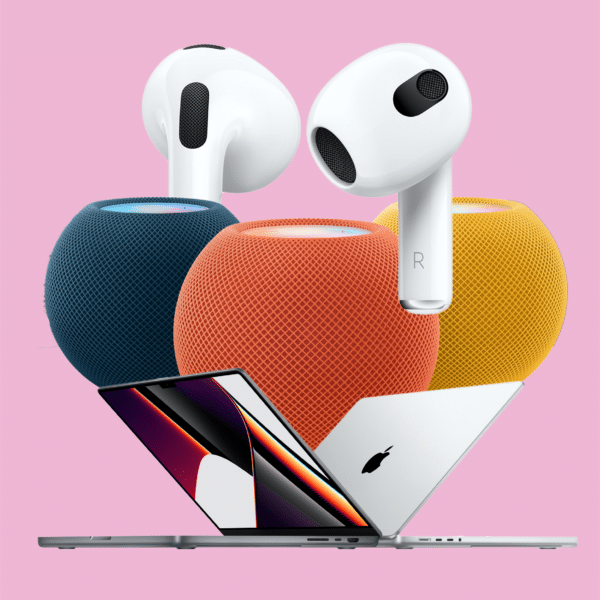 To start, a new Macbook Pro is about to hit the shelves. This Macbook is one of Apple’s most powerful Macbook Pro’s they have released to date with a super-fast M1 Pro or M1 Max chip. Options include 14” or 16” models. The M1 Max chip is the most powerful chip ever created for a pro notebook. Other internal improvements are 13x faster graphics performance, 3.7x faster CPU performance and 11x faster machine learning.

Both new models are geared towards improving the experience for creative users. The 14” model has 13.4x faster 4k render speeds than a 13-inch MacBook Pro with Intel Iris Plus. This makes it perfect for editing software.

Physically, the MacBooks have been geared towards creative users too. Apple has re-introduced an SDXC and HDMI port, as well as a Magsafe 3 port, three thunderbolt 4’s ports and a headphone jack.

Another release announced was the Airpods 3rd Generation.

Appearance-wise, the 3rd generation Airpods are similar to the previous generation, however, the new release has introduced some new, exciting features.

One of the most attractive features of the new AirPods are the Spatial audio. With dynamic head tracking, sound is in all directions to create a three-dimensional experience. This isn’t just for music, but for TV Shows, movies, podcasts and more!

The 3rd generation Airpods also include adaptive EQ. The microphone detects what you’re hearing, then adjusts low and mid-range frequencies to deliver a detail-rich listening experience. Wind noise is also reduced when taking calls due to the inset microphone and special acoustic mesh. A new feature to the 3rd generation is the skin-detecting sensor, which cleverly detects when your airpods are not being used. It can tell the difference between your ears and other surfaces, like a table or your pocket- clever, right?

Other general improvements are longer battery life. The AirPods case gives 30 hours of total listening time and six hours of listening time off one single charge. Unlike the previous generation, the new release are sweat and water-resistant.

Finally, the HomePod Mini is joining the new release. The HomePod Mini only stands 8.5cm tall, however, it delivers 360-degree audio. Much like other smart home devices, if you have multiple HomePods in your home, you can connect them together and create a sound system for your whole home.

As it’s an Apple device, you can connect to your other Apple devices for features like intercom. This is where you can speak through to other rooms via the HomePod. In addition to this, the HomePod can recognise up to six different voices.

“The most exciting thing I’m looking forward to is the new MacBook Pro’s, the reintroduction of the physical keys to the top row of the keyboard, the reintroduction of the peripheral ports and finally Magsafe is back after being absent for nearly five years. Along with the other massive improvements such as the powerful M1 Max chip, I think this is going to be a very popular and impressive model and I’m looking forward to getting my hands on one.” – James Bunting, Systemagic IT Technician and Apple Specialist.

Systemagic are Apple resellers and can buy kit competitively with both commercial and education discounts. Want to save time and money from buying direct or through retail? Get in touch today!