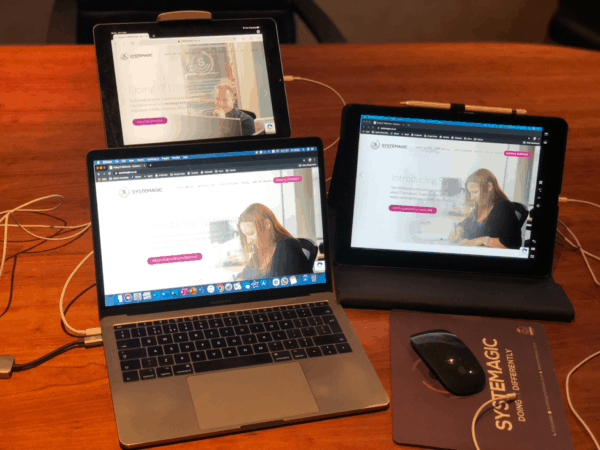 These are a few of our favourite (remote working) things

Most of the Systemagic Team are office based unless they are out on site helping our clients and even then, they tend to come in usually motivated by bacon sandwiches, pizza or the weekly treat fridge restock. However, increasingly with our growing geographic footprint and changing demands we have members of our team that enjoy remote working.  In days gone by it was possible to take a laptop with you but recreating the work environment when at home or from a co-working space it presented more of a challenge.

After all, you might have a laptop screen but that is no substitute for the double monitor array at the office and access to all of the various data and software could be hard to replicate without pesky VPN’s or convoluted processes with those abominable data security tags.

We have to say that, particularly following some recent software updates, we are finding it easier and easier to securely work from wherever we are in the country and, depending on access to quality broadband, anywhere in the world!

So, we thought we would highlight our current top three technologies we are loving to help us work as efficiently outside of the office as well as in it. The best news is some of them you might already be paying for!

When it launched, we have to say we didn’t see the difference between Teams and Skype and we wondered if it would ever really catch on, after all there are so many collaboration packages out there for people to use.  From Slack for the tech teams through to Whatsapp groups for the social side we thought that unless Microsoft got behind it then it was destined to fall by the wayside in much the same way as Yammer appears to have done.

To their credit Microsoft have really raised their game and Teams is something Systemagic has really embraced and begun to love as part of our daily routine.  What does Teams do? Well here is our cheesy American voice over video to explain.

Effectively for us Teams is now the central hub around which our team communicate via the chat function, voice and video meaning that wherever you are and whatever device you use you can stay connected with the office, attend meetings and contribute to everything from work problems to being social with each other.

Oh, and the best bit for most Office 365 users – it’s included within the price so there are potential savings from replacing other software. Microsoft are also making Teams their virtual phone system which will really set the cat amongst the pigeons and let your staff roam free!

We love having multiple screens!  We will just get it out there but driven by improvements in PC’s and laptops combined with a decrease in screen cost and an understanding of the inefficiency of constantly toggling between packages has been a blessing in our view.

But doing that on the go was extremely difficult if not impossible.  Until Apple launched its latest Catalina operating system that is!

So now you can wirelessly or via one cable, depending on which Apple products you have, use your iPad Pro as a second screen (sadly the third here is just for show as it doesn’t support that yet).  We have tried other products like Duet before, but they were buggy and slow and well, Catalina is a game changer as your iPad is genuinely a portable second screen on which to work.

SharePoint & OneDrive (as well as Dropbox!)

The final piece of tech which makes working anywhere easy is the advent of cloud data services and smooth syncing!  Obviously as Microsoft partners we use their products but the recent improvements in the OneDrive product (again included in Office 365) mean that managing what you take on the go with you has never been easier.

You can choose what to Sync from all your data sources, including SharePoint, and manage it easily and efficiently on the go, as if you were in the office itself securely without the fiddly security tags that we used to need to VPN in to a slow and patchy remote server.

Some of the senior team here also use Dropbox and are remarkably reluctant to change.  We understand, the team there did a brilliant job and the UX led the field for quite some time.  However, we feel that it is less controllable and secure at a business level and given OneDrive is included in your cost it’s a bit of a no brainer.

So there you have it, Systemagic’s top three technologies that allow us and our team to work from virtually anywhere at any time, unless it’s the beach, then we know we can but have better things to do. If you’d like more information on getting your business set up for remote working get in touch today!