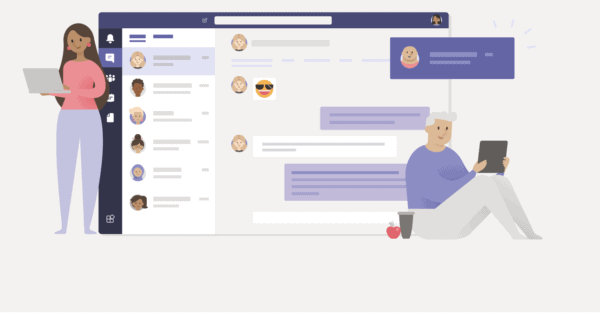 We’re big fans of Teams as our recent blog post probably made clear. We love the way it allows our team to collaborate across chat, voice call and video and enables us to work pretty much wherever we want to.

Teams is not a new product and despite being included the price for most Office 365 users there is quite a lot of confusion about what it is, with most of our clients assuming it’s just a swanky version of Skype for Business.

In reality, it’s a pretty powerful application that when used correctly can enhance collaboration within your organisation, assisting communication and ending the dreaded death via email that we all seem to be afflicted by!

So how does it work?

Teams replicates your office within the app as the place where you work together with your team.  Everyone who is in the office will be included in everything going on around them to a greater or lesser extent.

Within that there are channels which mirror the offices or departments within building.  There is a “General” channel which is very much the reception or main office, the only difference is that every conversation might be noted down, so be careful what you say about the boss!

There are also multiple options by which you can communicate.  From private one to one chats, group chats, calls or video conferences through to posting updates in the activity feed, everything can be done from one platform.

You can even organise meetings (virtual or otherwise), collaborate on documents and seamlessly share information at the drop of a mouse click all from the one place.

Will it work for your organisation?

Sadly, that very much depends on your organisation and how you do what you do.

Initial resistance has often been around lack of connectivity and the need to be able to download and respond to emails which can be later downloaded.  Realistically connectivity is less and less of an issue as Wi-Fi is everywhere, including planes and even the underground and with the roll out of 5G over the next year we might be fed up of being connected rather than struggling.

What we have found, within our clients as well as ourselves, was the need to embrace Teams and the culture shift to collaborative learning rather than operating in silos and addiction to email.  We were determined to embrace collaboration and after initial resistance, probably down to laziness rather any bad feeling we managed to get our whole team working together in one environment.

Our key tips for organisations looking to make the leap are:

This might sound like a weird thing to say but Teams is not going to be for everyone.  Small groups or those that work individually probably don’t need to make the leap if they tend not to collaborate.  That said, as Microsoft continue to develop the product and integrate it with all of their software suite, combined with the ability for Teams to replace your work telephone allowing you to work anywhere as if you were at your desk in the office makes it ever more compelling.

If you decide to make the leap, then you need to show your team that you are committed to it by ensuring you use it as much as you expect them to.

At Systemagic we ensured that Team’s was a place everyone wanted to be, investing in it as we did our office environment, by putting relevant content, being active and engaged with people as they use it and reacting to their engagement.

The key is to be supportive and try to match with your team’s efforts as they use it, so posts just don’t get ignored and efforts get attention.  We have some emoji and gif “ninjas” in the office and its now a game to see who can come up with the most original response.

Our “Client Team” is by far and away the most active and an easy way to share feedback, common issues and give early warnings to our team of potential problems which will impact all of our clients.

It won’t happen overnight.  People are used to their existing ways of communicating so don’t be too disheartened if email still persists, particularly as you still have to work with the outside world where email will be a primary means of communication.

We now have a policy of forwarding certain emails to channels in Teams and have discussed with some clients setting up a collaborative channel!

The key initially though is not to give up!

When we set out, we agreed that we would be engaged with Teams, we would try to keep our dialogue open and inclusive rather than resorting to private chats and we would try to be supportive of one another.

That’s not to say private chats don’t happen, they do.  And there is often quite a lot of light-hearted banter, especially when our senior team get out emojied but the key is to act just as if you were in an actual office and keep it respectful. Oh, and limit the number of Teams allowed, so that you don’t get overloaded!

We’re quite lucky at Systemagic that most of our team are young and therefore very much all about communicating across one platform (they love a Whatsapp group with their friends) so it was relatively painless initially.

But, even then, the aim was to embrace the people that made an effort so we had rewards for the “Teams Champion”, made it part of our quarterly awards scoring and made a big deal in our team meetings (where Team members out of the office use Teams to join) about those that were leading the charge.

So, there you have it.  Teams might not be for everyone, even though we think the reasons against it are probably dying out and the integration at the heart of Microsoft products makes it pretty compelling.  If you want to talk to a member of our “Team” about it, please do drop us a line!